“Your talent is a true gift and we are grateful that you shared it with our little ones!”--Torria Baker, Director, UCM Learning Center

​Groovy Nate is a children’s entertainer and Wolf Trap/Kennedy Center Teaching Artist who creates fun and educational shows using exotic musical instruments and puppet skits— a la Sesame Street meets Parliament/Funkadelic, meshed with The Electric Company, Kraftwerk, and Dub Reggae. He is also a GRAMMY NOMINATED ARTIST WITH THE ONE TRIBE COLLECTIVE.  Groovy Nate's shows encourage children and adults to move, sing, and play creatively with one another, while exposing them to various genres of music.  His first children’s CD, “Meet Groovy Nate” combines the interactive nature of his performances and classes with songs about sharing; inside beauty; eating healthy foods, and the joy of reading. For the past eleven years, Groovy Nate’s Music and Movement classes in the Northern Virginia are drawing families to return over and over again to enjoy the interactivity in every class.  Children will sing, play instruments and games, engage in creative play, and move to original and traditional music. For the past sixteen years, Groovy Nate has performed at schools, family events, libraries, and birthday parties in the DMV area.  In 2019, Groovy Nate released a single promoting seat belt safety simply entitled, “Put Your Seat Belt On.” Groovy Nate also worked as Music Director with Educational Theatre Company based in Arlington, VA.

Groovy Nate attended Howard University with a major in jazz studies and a minor in guitar.  After attending Howard, he performed with several Washington DC-based groups, and has been a featured guitarist on several CDs. In 1997, he founded the award-winning soul band, Oktbrwrld, with whom he made four CD’s. Groovy Nate wrote the film score and co-wrote the film short for BET entitled: The Water Story. Two of his songs are featured in the major motion picture, Cougar Club. 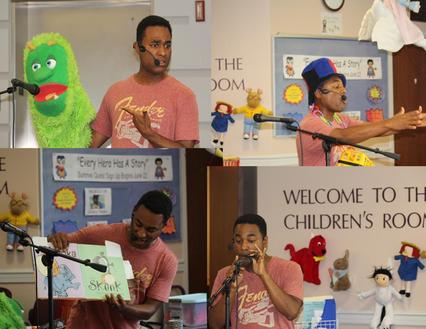 “He puts on an incredible show!” -- Lisa Barrera-Entertainment Committee, Arlington County Fair Board of Directors